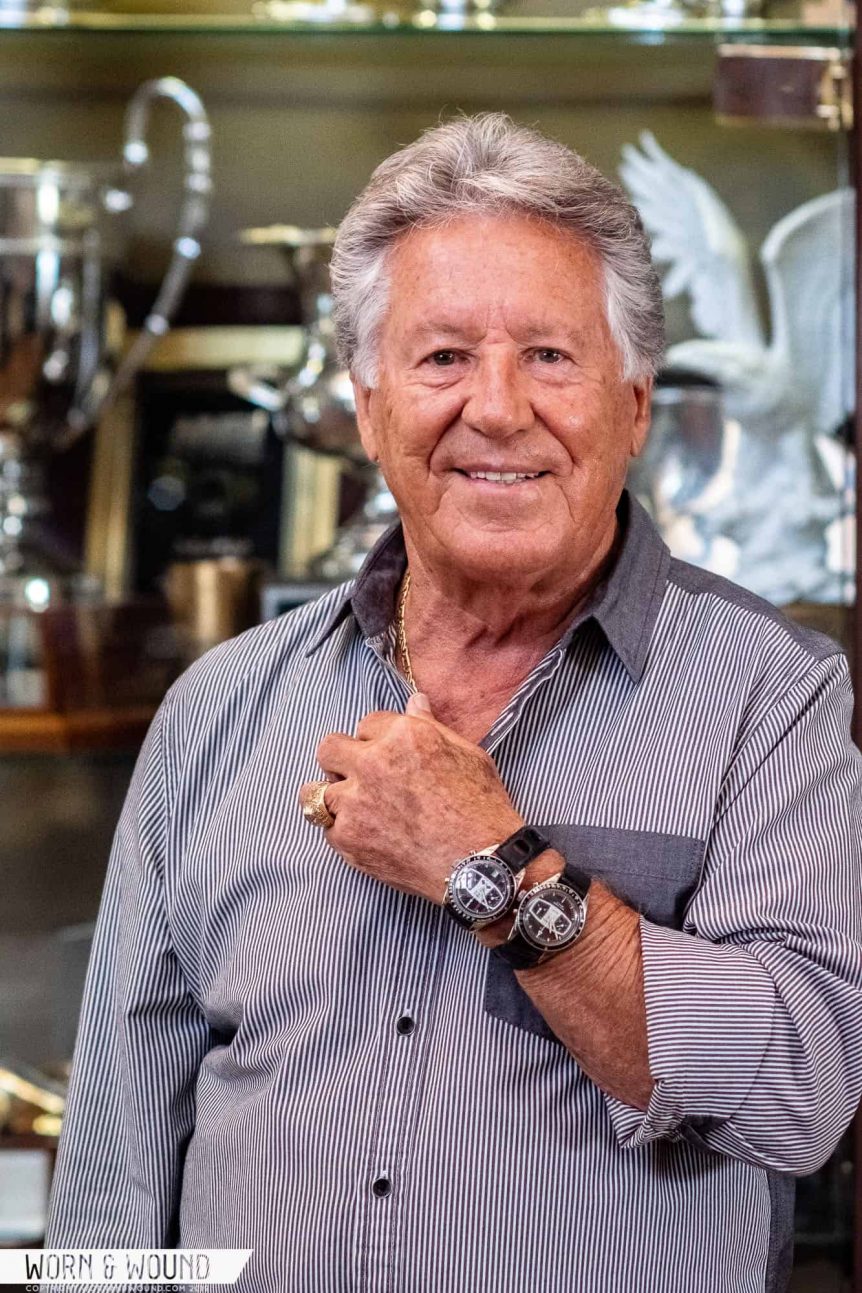 It can be surprisingly tough to find a watch you like without prices you hate.

As watches become more of a fashion choice and less of a timekeeping necessity in the Age of the iPhone, much of the focus has shifted to three main camps – luxury watches, Apple Watches (because Apple is everywhere), and budget-priced watches which are intended for the Fast Fashion crowd.

Yema watches largely fall into the luxury camp, but they’re much more affordable than your average Rolex.

As such, if you’re looking to break into the luxury watch world but don’t want to pay an arm and a leg for what goes on your wrist, they might be a good choice.

So let’s take a closer look at the history, reputation, and price range of Yema watches, along with a few quick reviews of some of the most prominent models on the market. 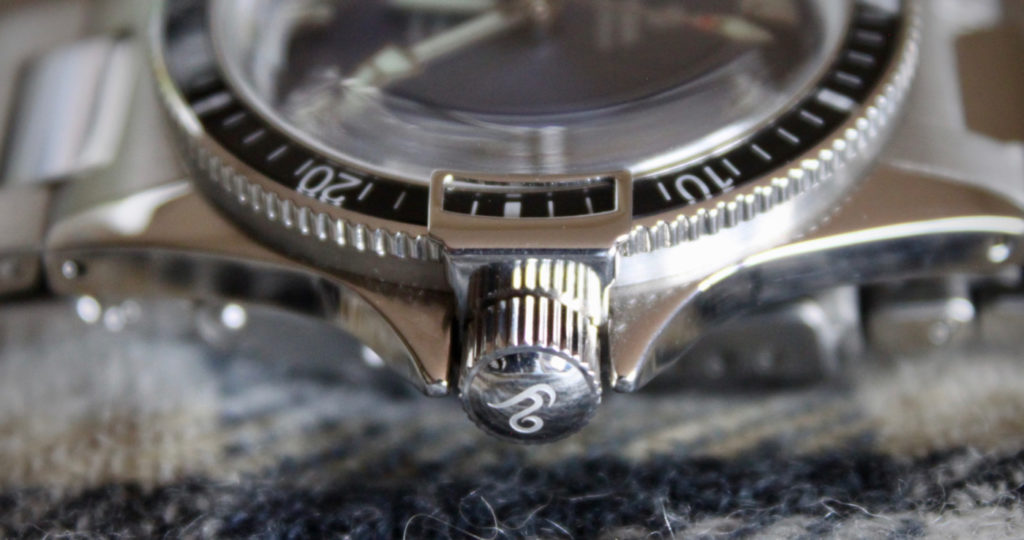 The story of the Yema watch begins back in 1948 with the birth of the company in France.

The first few years were full of firsts – including the first racing legend to wear it while winning (Mario Andretti) and its status as the first watch in space, being worn by astronauts at least ten different times.

By the 1960s, the watch was one of the most popular in France and was sold in over 50 countries.

Yema remained a popular European watch option throughout the 60s, with the Yachtingraf debuting in 1966.

This model was designed for those engaged in sailing. This same year saw the birth of the Rallygraf, the model worn by Andretti.

As Yema began to expand its brand, they started to become associated with these different adventurous activities, helping them gain traction with watch enthusiasts who enjoyed owning something which exuded a more active appearance.

1982 saw the watch go into space when it was worn by French astronaut Jean-Loup Chrétien, wearing the Yema Spationaute 1.

Not soon after Yema watches had gone into space, they headed to the North Pole as well.

In 1986 Jean-Louis Etienne travel 800 kilometers across the North Pole solo, the first time anyone had ever done that, all the while wearing a special weather-resistant Yema watch engineered to withstand extreme cold.

Finally, 2017 saw France make a return to space with its tenth astronaut mission, and once again, a new model of the ever-popular Yema, the Proxima, debuted with the flight.

Even though it isn’t as well-known in North America as it is in Europe, it remains a globally popular and pervasive brand with a reputation for affordable quality and style. 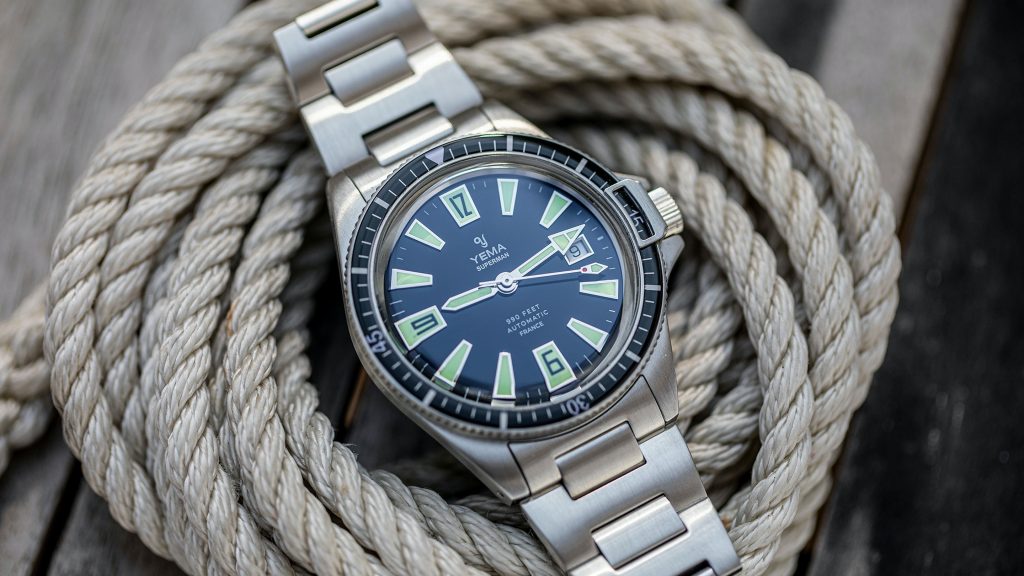 When assessing any watch in terms of its aesthetic appeal, you need to pay special attention to its case size, bezel (which is the raised ring with numbers surrounding the watch face), strap, and the impact all of this has on its overall style.

To start with the case size, Yema watches have a characteristic bracket attached to the bezel which helps hold it in place.

It helps make the bezel stand out while serving the practical purpose of holding it in place – a true win-win for form and function.

This design feature is straight out of Yema’s past, with it being first introduced in watches produced for the French Air Force back in the 1970s.

The case size on Yema watches isn’t too large while still being eye-catching.

The strap features brushed steel, although some models offer the option of a leather bracelet instead. 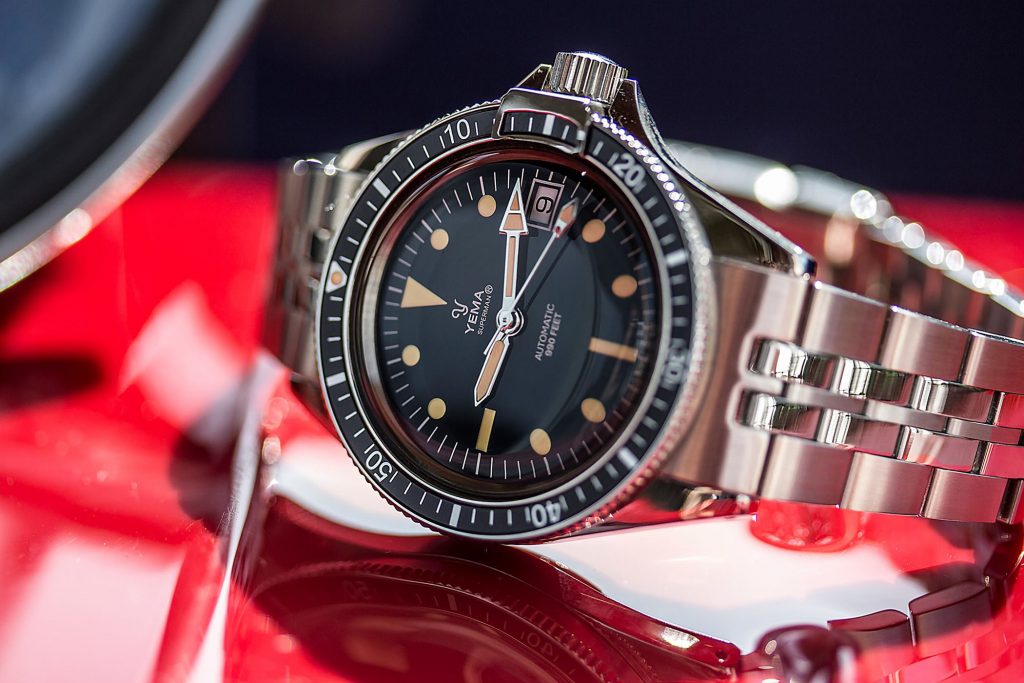 As stated, these watches are available for a few hundred dollars.

They consistently sell for roughly $500, with some models occasionally being priced closer to $750, and some models of the Superman even selling for over $1,000.

Still, $500 remains the reliable baseline for which you can expect to get this watch. 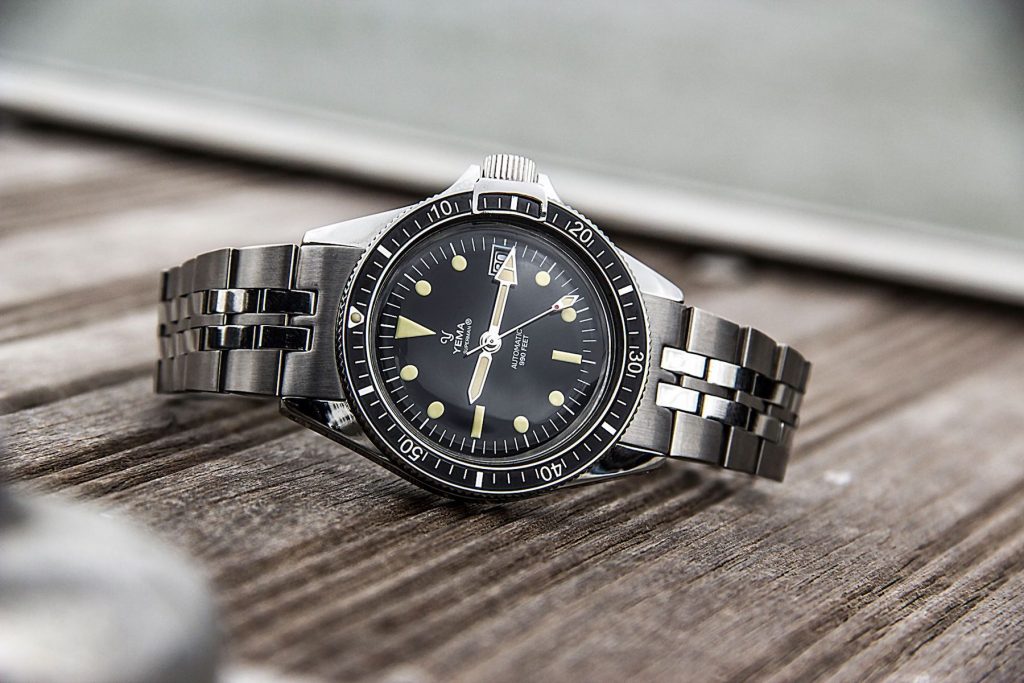 Among the most important features to consider when evaluating any watch are the materials from which it’s made, its overall durability, its water resistance, and the mechanics which make it work.

True to their history, you can find Yema watches marketed at different styles named after some of their historic firsts, such as their Motorsport Collection and Space and Aviation Collection.

Assessing the materials first, Yema watches are made from brushed stainless steel.

This gives them just enough of a polished look to join the ranks of the luxury watches without making them too expensive that they become un-affordable.

These watches also tend to have vibrant watch hands stand out from black or blue watch faces, making them all the more noticeable. 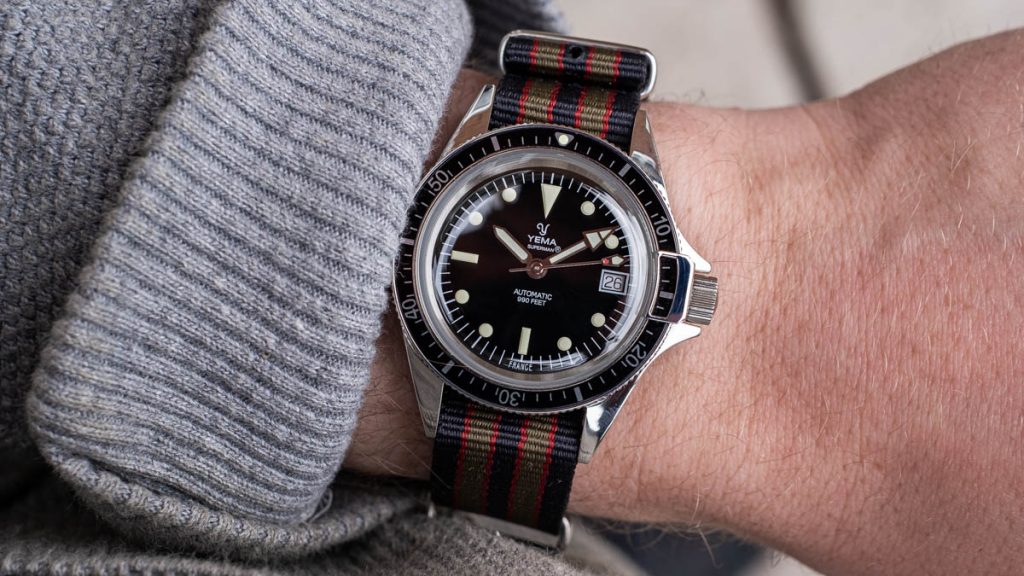 How and when to wear YEMA watches

As mentioned, Yema is associated with activity and action (or at least that’s the direction of their branding) and so the ideal setting in which to wear them is when you are out and about but still want to look stylish.

These are fashionable watches for people on the go (or, again, who want to appear that way) and are more suited to life on the town than a boardroom or ballroom.

These aren’t the kind of multi-thousand dollar watches you show off to friends for them to ooh and ah at, but that’s never been Yema’s direction.

The brushed stainless steel, waterproof status for a couple hundred meters underwater, durable casing, and overall aura of adventurousness make this a watch to be worn while doing activities such as those described here.

Finally, let’s spare a few sentences to take a look at some of the leading Yema watches. 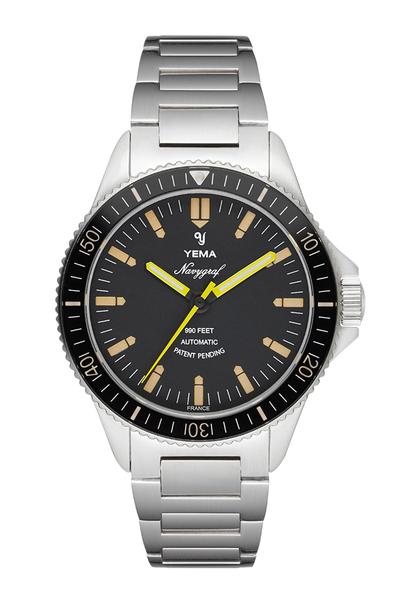 This is a variant on Yema’s aforementioned sailing watch.

It features mythical markers with an exclamation mark, and is waterproof to up to 300 meters—100 meters more than the old model.

It has a 39mm brushed 316L brushed steel case and pairs a black watch face with yellow hands, one of the brand’s most iconic looks. 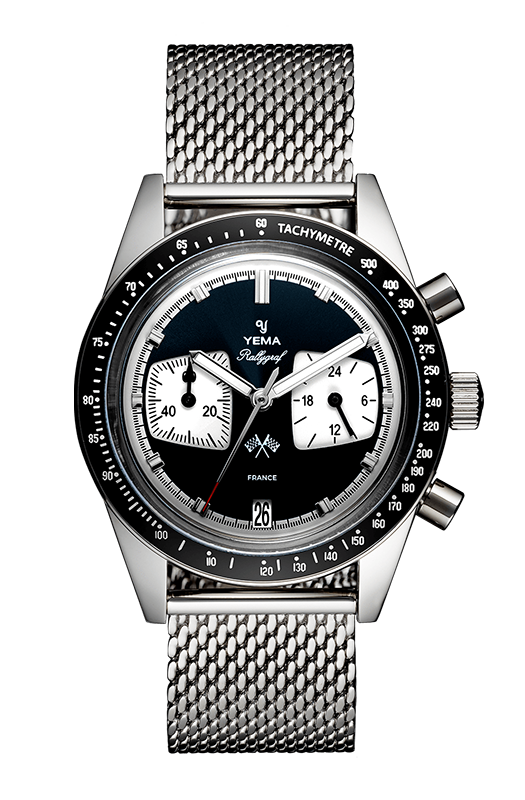 As mentioned above, this model is based on the motorsports-centric watches of the 60s worn by racers like Mario Andretti.

If you have a need for speed, these watches have a reputation to match.

They are actually one of the brand’s most affordable options at just $350.

They come with a steel mesh strap, 316L brushed steel, and dual dials on either side of the watch face to fit the racing motif a la a speedometer. 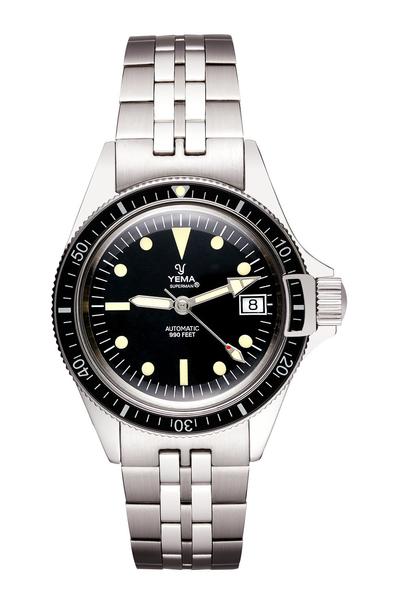 The price for this model varies widely, from under $500 to over $1,000, so you can shop around for the best price.

This model is also waterproof up to 300 meters.

It features 36 ruby jewels in its setting and is by far the most upscale option.

This model, like the others, makes use of 361L casing. The piece de resistance is its elegant sapphire watch face. 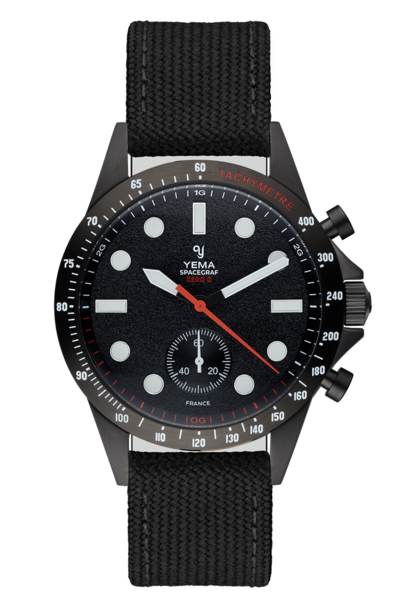 This model is inspired by Yema’s space-themed watches of the past.

It is only waterproof to 100 meters, but then it’s designed with cosmological and not nautical adventures in mind.

It makes use of the same 316L brushed steel casing, although rather than extending that to the strap it features a fabric mesh with leather lining instead.

This model is a reasonably affordable one, being priced between $400 and $500. 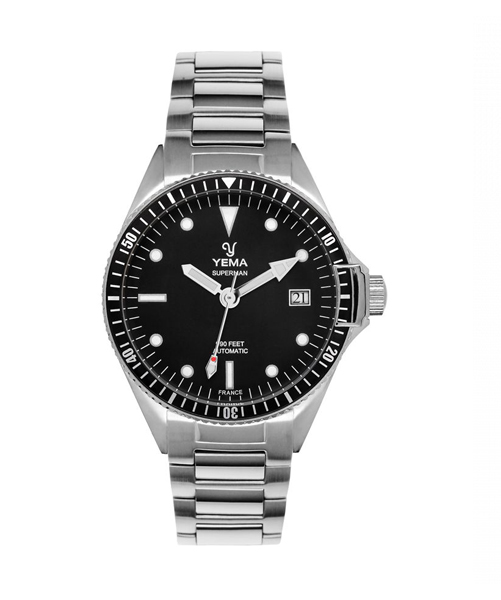 While this watch has a black watch face and is incredibly elegant, it’s also hard to find.

That said, if you do find it (and you’ll likely do so from a European seller) this is one of the more expensive ones, climbing up to around $800.

It features the iconic black watch face that helped make the Yema brand famous, along with 31 rubies, which helps explain the price.

The watch hands are much thicker on this model than the other listed here.

Of all the models listed, this model looks the most like a traditional luxury watch.

From outer space to the race track, under the sea and atop the North Pole, Yema watches have been everywhere, and can make for an intriguing part of any watch collector’s collection.